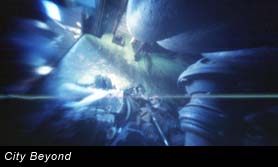 Alongside the commercial cinema of narrative and spectacle in India, there has always been another practice call it avant-garde, experimental, or artists’ film and video. Since its inception in 2003, Experimenta, the independent international festival for experimental cinema in India, has become a significant forum in South Asia for the exhibition, discussion, and dissemination of ideas about new genres of film. Shai Heredia, Experimenta’s Festival Director, has curated this programme featuring two screenings of recent innovations in moving image art from India.

Presence is the second film from the Behind the Tin Sheets Archive. Landscapes shift, people move from place to place – time passes and spaces evolve. Through this metamorphosis, new things try to replace the old. Some remain and linger and some go missing and disappear. We remember and we also forget. Between this, we encounter the invisible. This film reflects the subconscious of migrant workers against an urban landscape in metamorphosis. As they carry their stories in and out of many cities, the cities bear witness to these fragments. A point of impermanence and permanence collide, in close proximity with the filmmakers’ haunt within the city. Suspended from time and space, the familiar begins to render the unfamiliar.

This film was shot in a redundant Thermal power plant in the outskirts of the city of Guwahati. It forms a response to the artists’ interest in constructed signs that can never be replicated or remembered and in the relationship between matter and memory. There is an endless circularity and an unbearable silence — the pause A point of impermanence and permanence collide, in close proximity with the filmmakers’ haunt within the city. Suspended from time and space, the familiar begins to render the unfamiliar.

After the monsoon floods in 2005 that submerged Bombay, the filmmaker returns to her native city to examine the personal impact of this devastating event. The result is Jan Villa, a tapestry of images that studies the space of a post-colonial metropolis but in a way that deeply implicates the personal. The destruction wreaked by the floods becomes a telling and a dismantling of other devastations and the sanctuaries of family and home. In its structure, Jan Villa is a vortex, drawing to its center all that surrounds it.

City Beyond is a film that speculates about the lives led by inhabitants of a submerged civilisation. The superstructure has been recently discovered in the crevices of the ocean floor. The film moves through the submerged landscape, gathering glimpses of life, times and the end of a lost society.

There is Something in the Air is a call from the periphery of sanity. A series of dream narratives and accounts of spiritual possession as experienced by women ‘petitioners’ at the shrine of a Sufi saint in northern India. Drama unfolds via dreams, appearances of djinns and disappearances of women. The shrine becomes a space for expressions of longing and transgression. The film invites the viewer to a fantastical world, where fear and desire is experienced through dreams and ‘afflictions of air’. The shrine is a space where performance becomes the only rule of engagement, and one can begin to think about the possibilities that ‘insanity’ produces.